Robert Huot’s Diaries are a heady mix of visual high jinks, exquisite painting, and confession. Painted between 1971 and 1975, they are cinematic in their enormity and utterly unconventional in appearance. It may seem at first glance that the differences between the rambunctious energy and emotional searching of the Diaries, and the austere formalism of Huot’s mid 1960’s paintings and the intellectuality of his late 1960’s conceptual pieces, are unbridgeable. They aren’t. If Mondrian’s paintings can be described as harnessed chaos, then Huot’s liberated, if self-conscious, dance through miles of cotton duck and paper can be seen as the unharnessing of the reticence, caution and intellectuality of earlier years.

The Diaries are painted, drawn and written upon; covered with glitter, paint, and fabrics. Their rhythm is alternately fluid and compulsive, sequential and halting. The white ground, the original tabula rasa, is the constant place (one might call it the unformed persona) upon which marks, the materials and emotions were daily committed. The paintings, are sometimes elegant, sometimes ungainly, simultaneously sophisticated and childlike. They are alternately easy to understand and obscure. For example, Diary #48 (February-March, 1975) opens gloomily with: “The Ides of March and Famoustius. I’ve been feeling very sorry for myself and somewhat fucked over.” And then gorgeous dancing numbers, words, and images sprawl over yards of paper, simply drawn heads of cows serenely overlap; stars, a red heart and green glitter tumble after one another; and around the red Valentine’s Day heart, unexpected and ironical words announce a show of his work at Colgate University and the decree of his divorce. The mood switches and we are off and running down an emotional and painterly runway.

Issues of both personal and art historical significance coalesce in these paintings, for their unwieldiness and visual irreverence bespeak both Huot’s evolution out of his own and other’s styles, and his disenchantment with contemporary art and art politics. When Huot made his first Diary films in 1970, the rhetoric and publicity of the New York vanguard art was unusually diffuse. No longer did pop, hard edge abstraction and conceptual art appear insuperable. For one thing, there was a noticeable revival of painterly abstraction. But more striking, realists of all variety proliferated (encouraged undoubtedly by 22 Realists show at Whitney in the spring of 1970); and video art was an ever more lively presence. Together they seemed to represent an alternative esthetic to abstraction, one concerned with photographic reality, narrative and the mundane. Critical acclaim; Johns, Warhol, Stella, Olitski, Judd, Morris and Smithson won the usual plaudits. What seemed clear, though, was that in the midst of an emerging downtown art locale in SoHo and apparently vigorous activity uptown, the vanguard “art scene” was going a little bit out of focus.

In addition to stylistic uncertainties in 1970, artists were socially and politically uneasy. Women artists were becoming more vocal in their demands for equal representation. And through the Art Worker’s Coalition, which Huot helped found in 1968, artists organized to gain more control over the treatment of their work in museums, galleries, and magazines.

Huot’s dissatisfaction with the art scene was not the result of any lack of success. He had four one-man shows at Stephen Radich (uptown at 68th and Madison) between 1964 and 1966, and had appeared in 16 group shows between 1964 and 1969. He had also been among the first to exhibit in SoHo (at Paula Cooper; in fact Huot and Lucy Lippard organized her opening show in ’68 which was a benefit for the anti-war movement.) And the work he was doing was beautiful – minimal and then conceptual art of extraordinary quality. As I see it, however, his simultaneous involvement in 1968 with the Art Workers’ Coalition and the Cooper’s SoHo gallery indicated a disenchantment with his vanguard experience, particularly in its more political ramifications.

In 1970 he moved to his farm in upper New York State, turning his back on New York’s authority and its prevailing esthetic judgments. In January 1970 he made his first Diary films and March 1971, his first Diary paintings. They mark, then, a conscious break with his own art and life style in New York City, but they also coincide with a contemporary artistic restlessness with vanguard values and politics. Huot like the video artists and realists (albeit in very different ways) was thumbing his nose at vanguardism.

The sheer size and uncontainable bluster of the Diaries announce their esthetic independence. Their jarring juxtapositions of high- and low-culture vocabularies, and artistic and anti-artistic elements overtly challenge high art values. In Diary #47 (January 1975), for example, images include pop brown-and-white cake-icing abstraction (#3), glitter and baby pink paint with the words “There’s a new girl Milkowski,” (#20, commemorating the birth of artists Tony Milkowski’s and Susan Hartung’s daughter,) bathroom reading hung from a string (#39) as well as the beautiful, happily colored and witty “Corn stubble in a red field thru my legs” (#4), the decorative Matisse-like doodles in “el Marko” (#16), the elegant but voluptuously curving 6’s (#6). Handwriting in this Diary often resembles graffiti, and drawings sometimes look like a child’s scribble. As frequently, however, paint and other materials are carefully and precisely applied. An endless dialogue reverberates between “junk” and art, household familiars and museum objects.

Huot’s equating of high and low art, as well as his coupling of apparently disparate activity in general, is an intrinsic part of his personality and deeply rooted in this past. In the 1950’s he was as compelled by Ernie Kovacs as he was by Joe McCarthy. And as a teen-ager, Petty and Vargas Girl drawings in Esquire and reproductions of Michelangelo fascinated him equally. He found both erotic. Such experiences radicalized him, for they unwittingly precluded between life and art. He just compounded them. Similarly, when he was an undergraduate (at Wagner College in Staten Island) he both majored in chemistry and painted in the “art room.” And when he graduated from college (1957), he got a job as a chemist and continued painting. In the army (1958-60) he also painted. He didn’t feel conflicted during those years, he was just doing different things.

Even more damning to a vanguard public than his indifference to cultural separatisms, is Huot’s denial of contemporary standards of simplicity and emotional unity. “I want the works to be non-relational,” he says, “i.e. today’s entry is as uninfluenced by yesterday as possible.” In fact, the paintings can be convincingly described as both controlled and spontaneous, cerebral and instinctive. Or, one could push these traditional polarities further and call them masculine and feminine. Take Diary #28 (June, 1973), for example. Unpredictable explosions of color, stained and splattered upon the surface alternate with carefully drawn, even geometric forms. Rhythms of retention and release are in tandem, as are vascillating mood tones. This Diary is both self-consciously art historical (i.e. “cerebral”) – strains of Kline, De Kooning and Henry Moore are clear – and terrifically high-pitched emotionally.

Indeed Huot himself, with this long hair, his obvious awareness and delight in his body, his emotionalism, (so-called female qualities, but seen as “failings” when expressed by men), seems to be looking for the female in himself. Or, to put it another way, he wants to loosen up the interior male controls; he wants to feel freer to be many and contradictory things. Undoubtedly the heightened consciousness that the women’s movement provided reinforced these inclinations in him. In1974 he made a somewhat feminist film called The Beautiful Movie (3 minutes). In technicolor elliptical frames, a nude woman seated in bed lovingly combs her long hair. That image dissolves and a big, broad, hairy-chested man briefly comes into focus. He also sits in bed and combs his long hair. (If the film is not convincingly feminist in tone, it is because there is something aggressive about the man’s gentleness, as if he had to assert it in order for it to happen at all.) 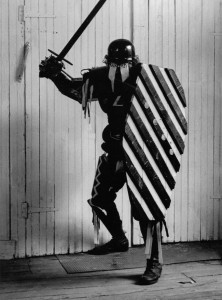 Huot’s indifference to the esthetic (and sometimes practical) requirements of the New York galleries and the market place also betrays itself in the very format of his Diaries. Their size, discontinuity and theatricality deter people. For his purposes however, the format is perfect: the enormous scroll is inherently mobile (the opposite of the objectified and necessarily frozen single-painting format), emotionally varied and unpredictable. They’re movies, murals and daily chronicles rolled up into one. They are enthusiastic, theatrical and fun. In fact, theatrically and play are basic elements of Huot’s personality (and one can see this even in his minimal works.) Writing about himself in 1974 he remembered that “the first ‘real’ art event I participated in, as a costume maker, choreographer and performer. Bob Morris and I did a piece called “War” at Judson Church in early 1963.” Huot is a man who loves to dance, who plays the trap drums and who throws five-day parties. For him, art is life and vice versa, and both are fantastic!

As Huot reports, rejoices and recoils in the presence of his daily activity, committing these responses to his Diaries, he also comments upon his conceptual art. His paintings are not addressed to 57th street and SoHo audiences, for they are not insistently vanguard and elitist. I am reminded here of Allan Kaprow’s work since the late 1950’s. More than anything else, the Happening (like a Huot Diary) is meant to be a shared human experience. One can’t sell a Happening (although one certainly can be paid to do one,) and anybody ostensibly can take part in one. For almost 20 years Kaprow has been saying, “No,” to the art establishment and its rigors. So now is Huot.

Perhaps it is appropriate that Huot teaches at Hunter College whose very building at 68th Sreet and Park Avenue is the polar opposite of SoHo chic. Like everything else that is public in New York, it is overused, poorly cared for, and a leveling experience. At Hunter, Open Admissions has created a new breed of students who are practical, materialistic, openly emotional and aggressive. No matter how much they are upwardly mobile, their curiosity grows from their particular class sensibility and experience. They are as compelling and intelligent as any people one would want to meet, but they are also like screeching subway trains scrawled with graffiti – like Huot’s Diaries.

Last summer I gave a number of my artist friends a favorite book of mine to read – John Berger’s Way of Seeing (New York, 1973). Eschewing questions of style, Berger asks instead what is art’s function and how are its contents related to our daily lives? Unlike most of my friends who hate the book, undoubtedly feeling that it had robbed them of their specialness and power, Huot liked it enormously. Because he is less attracted to the conventional roles of the artist and art, he is potentially dangerous to the art establishment. But he is positively delightful to an unpretentious, pleasure-seeking audience. His paintings couldn’t be friendlier, more accessible or human. And they are there for everyone to enjoy!

Eunice Lipton is an Assistant Professor of Art History at Hunter College with a particular interest in the social and political context of art in modern times. She has published articles and reviews in “Artforum, Art in America” and “The Fox.”