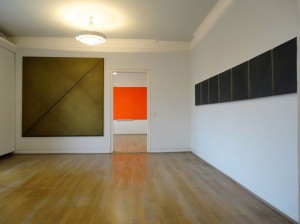 My “Hard-edge” – “Minimal” paintings were receiving a good reception from the critical and gallery communities. I was showing with Stephen Radich then Paula Cooper in New York, Müller in Germany and Ziegler in Switzerland. I was “successful” but uncomfortable. The Viet Nam War was calling into question my whole way of life. What was the function of my art ? What was my role as an artist, teacher and intellectual? Was I simply going to go on with business as usual or take some kind of action?…
(From’The Art of Context’, 1990 with Robert Huot)